We have recently come across a trio of authors who are perhaps only related in this author’s mind but who shed important light on America’s post war political economy. One deals with Nixon and Watergate, another with the Bush dynasty, and another with American Empire. The fascinating aspect about these authors and their stories is that they are respectable establishment types who are not considered to be on the fringe of intellectual society. On the other hand, those of us steeped in the occultic nature of our government will find little new revelation. Nonetheless we highly encourage examinations of their works.
The first author is Len Colodny whose seminal book Silent Coup was a best seller when published in 1991. He made the argument that Nixon was removed from power by subversive forces in his own administration with special thanks to the traitors Alexander Haig and John Dean. Dean along with Bob Woodward, who gave us the Deep Throat deceptions, has dominated the understanding and interpretation of Watergate and Nixon’s villainy in the affair. Colodny originally exculpated Nixon as an unwilling participant manipulated by forces more focused than himself but has since recanted of that view based upon new information from Nixon’s tapes. His current thesis is that Nixon took an active role in the cover-up while John Dean thought that he could throw Nixon under the bus to save his own hide. Dean prevailed while Nixon was thrown to the sharks. They both participated in obstruction of justice with Nixon directly handling the cover up in March of 1973.
None of the foregoing alters our thesis that the CIA engineered the political assassination of Richard Nixon because of his unwillingness to mind his masters. This is where our next author, Russ Baker picks up the story in his book Family of Secrets. He shows that the Bush’s going back to Prescott Bush have established powerful intelligence connections and with other oligarchs of the occult have much of American power structures in a vice grip. He shows George H. W. Bush’s mysterious presence in Dallas on the day of Kennedy’s assassination, his Zapata Oil Company which was a front for intelligence work and many other associations related to the CIA. Long time readers of these Chronicles know that we extend the thesis further by asserting an involvement by the Bush’s in the Kennedy assassination.
The final author of note is Chalmers Johnson who has sterling credentials as a former professor at the University of California Berkeley who was a Far East affairs expert who then started his own consulting firm in said matters after retiring from his academic position. He was a Cold Warrior who came to alter his position fundamentally after work with the CIA and further study of the Soviet phenomenon. One of his first disturbing observations is that the CIA so missed the boat on the crack-up of the USSR that he wondered what the CIA was doing with all of its funding.
He was further alarmed by the continued bellicosity of the United States following the demise of the USSR. Surely its dissolution would justify a peace dividend which was briefly discussed at the time. However with over 1000 bases around the world – and hundreds of them acquired after 1991 – he began to develop his thesis that America has turned from a republic to an Empire just as did Rome.
Strangely enough the CIA and its paymasters had the same thesis about themselves. In fact, one former CIA asset, an erstwhile preacher named Robert Thieme, jr. fulminated at great length about the need for the United States to transform itself from republic to an Empire because we had long outgrown that structure of government which was no longer suitable for the Cold War.
So Johnson has caught up with Colonel Thieme in his view of the American century but takes the opposite position that this is bad for our country and is causing its political, economical, and social exhaustion. Watching interviews of Johnson done five years ago  so eerily sound as though they were done this year (2009) because of his prescient anticipation of the economic crises we would face.
Although there is nothing new of substance in these books they each show different angles of the hidden powers and agendas which rule America which superficial students of American history usually overlook. They are worth reading especially by those who think that folks such as those publishing the The American Chronicle are possibly kooks.
Copyright 2010 Tony Bonn. All rights reserved.
Posted by Tony Bonn at 7:52 PM 3 comments:

McGeorge Bundy and the Assassination of John Kennedy 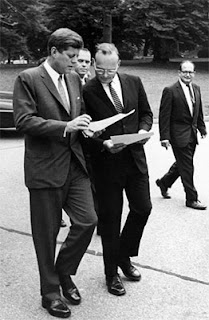 Who Was Lee Oswald? 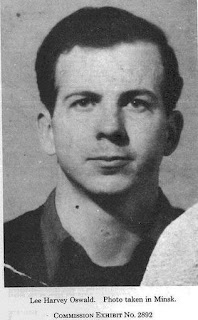 Veteran scholar of the John Kennedy Assassination Joan Mellen has published another ground breaking study documenting Lee Harvey Oswald’s deep connections to US intelligence. She is perhaps best known for her work on Jim Garrison’s cutting edge investigations into the Kennedy assassination when he was district attorney for New Orleans. Her recent article, Who Was Lee Harvey Oswald?, demolishes the Warren Commission’s pack of lies stating that Oswald was a lone sociopath. He was most emphatically not the president’s assassin.
Mellen of course is not presenting any new fundamental information but she has meticulously documented some obvious ties which Oswald had with US intelligence during the 1950s and 1960s starting with his tour with the Marines. Although Mellen does not cover all of Oswald’s intelligence connections she presents some of the more salient ones including his work for the CIA, FBI, and US Customs Intelligence while ommitting his US Naval Intelligence work. Two bits of explosive information provided include Oswald’s espionage work in the USSR plus his very high status as an intelligence agent.
This picture is totally at variance with the Warren Commission which spends relatively little space on Oswald out of the 26 volumes it issued to obfuscate and confuse the American public. The Commission completely hacks Oswald in the most shameful and deceitful manner in order to concoct the absurd story that Oswald single handedly assassinated JFK from the 6th floor of the Texas School Book Depository on November 22, 1963.
We will not detail the ludicrousness of that story as others have thoroughly dismantled it elsewhere. The important point is that Oswald successfully entered and exited the USSR during the uber height of the Cold War; was debriefed by the CIA upon his return; married a high ranking KGB officer’s daughter; was known to be affiliated with many intelligence agencies; knew Jack Ruby; and held many menial jobs with their own interesting relationships. This is hardly the profile of a lone sociopath. If you want to see a sociopath, study the Columbine murderers who were more than likely MK Ultra victims.
What this means is that the CIA was directly involved in the Kennedy assassination cover up. I assert that it was directly involved in its planning and execution as well. The great pains which the CIA took to cover up its connections to Oswald are rather astounding considering that Oswald was supposed to be a deranged loner.
The case against the CIA was established convincingly by Garrison and corroborated with additional evidence by Joan Mellen. There is no smoking gun to be sought. As in any other complex crime, the weight of the evidence need merely be assembled to establish the basis for conviction. Garrison and Mellen have done this. The endless navel gazing over the identity of the Kennedy killers can stop and trivial pursuit of arcane evidence can desist. Oswald was not the President’s murderer. In fact, Oswald was never on the 6th floor of the TSBD nor on the 5th floor from which one of the many shots was fired.
When the Oligarchs determined to murder Kennedy, Oswald was a convenient patsy who had been prepped by months of careful manipulation by his CIA handlers to take the rap. Oswald spake sooth when he declared that he was just the patsy.

As for the immediate case of the CIA and Oswald my thesis is thus– Oswald was sent to the USSR to provide technical information so that the Soviets could shoot down Gary Powers in order to sabotage Eisenhower’s détente initiatives. Eisenhower briefed JFK on this episode which resulted in his brother Robert developing a keen interest in Oswald so that the Kennedys could monitor CIA activity against them. This probably explains in part Kennedy’s wish to splinter the CIA although certainly the Bay of Pigs must factor into their distrust of that dark organization. Because RFK feared that his very early knowledge of Oswald would be exposed by Garrison’s investigation, he went full out to destroy it by unleashing his attack hack Walter Sheridan against Garrison. Whether he did this to prevent political embarrassment or because he feared CIA retaliation is something yet to be determined.
The 45th anniversary of Kennedy’s assassination finds us making great strides in the resolution of this national night mare – a night mare perpetuated by very powerful forces within and without government including most notably the press. It is time to throw away the quackery about Lee Oswald being the president's killer and recognize that only an organization with the sophistication and vast resources of the CIA could kill a president.
Copyright 2008 Tony Bonn. All rights reserved.
Posted by Tony Bonn at 9:05 PM No comments: