One Minute Chronicle: Why the Price of Oil Collapsed

Those who have to drive may have noticed how over the past 2 years the price of oil has collapsed. While many valid reasons exist, one often overlooked cause is the intervention of ISIS in world oil markets, in collusion with their friends at Morgan Stanley and elsewhere.
There is no doubt that more fuel efficient vehicles, declining economies, and alternative fuels have played a part in the decline of the price of oil, with other more material causes such as the disruption of the US petro-dollar by de-dollarization, and the decline of the  oil derivatives market, but one cannot overstate 2 specific causes in the Middle East, not the least of which is ISIS theft of oil, and lifting of sanctions against Iran.
Thanks to a fantastic PowerPoint presentation Vladimir Putin made at G-20 Summit in 2015, we know exactly how ISIS stole Iraqi and Syrian oil and sold it on the New York black market to firms like Morgan Stanley and Goldman Sachs, the latter firm which PBS shamefully allows to sponsor its programming, which operated under Switzerland's famous secrecy laws - which are not quite so secret any more.
Putin embarrassed, if not humiliated, the Western world's terrorist leaders of the United States, United Kingdom, France, Italy, Canada, Israel, Turkey, Germany, and others who are involved in this scheme. In urgent need of arms to murder people and wreak havoc in Syria to support the Bush Crime Syndicate's Project for a New American Century, ISIS was willing to sell through Turkey's President Erdogan and his son oil on the cheap.
It may also be the case that some power peddlers helped crush the price  of oil as a way to either hurt Russia, which is quite dependent on oil exports, or the US which was on a trajectory of "oil independence" through its massive fracking  of the shale sources, but ISIS played a huge role.
Now that Putin has put a dent in that stolen oil supply, its price has started to rise. It will be interesting to see where the BCS, Israel, and other Western powers turn next in order to bring murder, mayhem, and destruction

One Minute Chronicle: The Rise of CIPS

Jim Willie has announced that the Chinese government has reported successful testing of the Chinese Interbank Payment System, a rising threat to the dollar denominated SWIFT system used to handle domestic and international interbank payments.
The significance of this development is that SWIFT will no longer hold a monopoly on international banking transactions, and will result in diminished stature for the dollar.
Willie opines that the dollar will vanish, and while that statement is a bit extreme, it is certainly the case that the dollar's role in international trade will diminish, and in time be replaced by gold based transactions.
The appearance of CIPS represents another financial milestone in Chinese economic and financial puissance which will deprive the United States of another political tool it uses to impose its international tyranny.
It is hard to say how much time will be required before CIPS is fully functional and a prominent competitor to SWIFT, but once online, it will draw much traffic from nations who are chafing under the bit of American hegemony.
The implication to Americans is higher prices for imported goods since de-dollarization will devalue the US currency which has held undisputed rank in international commerce and finance since Bretton Woods.

Copyright 2016 Tony Bonn. All rights reserved.
Posted by Tony Bonn at 12:43 AM No comments:

Below is a picture of a Saudi Arabian woman whose main crime was being a woman. The United States supports the Saudi Arabian government for this very reason, and isn't it ironic that the woman who keeps state department official documents in her bathroom closet has said nothing.
Most Americans fail to understand that Saudi Arabia is a Jewish vassal state whose Wahhabism is a variant of Talmudic Judaism. The United States in turn is a vassal state of the Windsors and the Jewish City of London Banksters.
Meet the Old World Order the same as the New World Order: 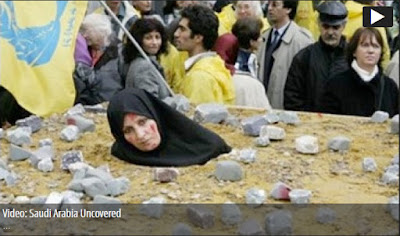 Although we rarely post links because they go bad, the one we provide is so important that we will risk a sour link. The censor thugs at Google have already taken down this video once, and we believe that in support of the murderous, butcher regime of Saudi Arabia will do so again. You owe it to yourself to watch how this Jewish and American ally tortures its people.

Winston Churchill, though praised by many, was not a nice man. He was the incarnation of evil, a mass murderer, and the official instigator of World War 2. To read more about his psychopathic character, follow the link below to our new website.