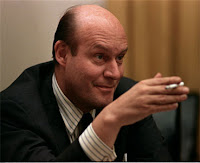 One of the harvests of the Assassination Records Review Board was a memo composed by Nicholas Katzenbach (b. January 17, 1922) in which he lays out the case against Lee Harvey Oswald on November 25, 1963. To a man who was supposed to uphold the idea of innocence until conviction the memo surely stands as a profound betrayal of that ideal. But as always in the world of deep politics, there is more to the story than meets the eye.
There are still many who speak derisively of a conspiracy to kill President John F. Kennedy but we note that the Jewish leaders of Czechoslovakia denied the existence of the Holocaust in 1944 even as Vrba and Wetzel provided them with firsthand accounts of its workings. We mince no words about the overwhelming evidence showing that there was indeed a conspiracy to murder the President of the United States and that it was orchestrated and covered up by the most powerful men in the nation. The memo of Nicholas Katzenbach is the smoking gun of the cover-up.
Katzenbach was deputy attorney general at the time he sent the memo to Bill Moyers ( b. June 5, 1934 ) who was then special assistant to President Johnson. Katzenbach would later become Attorney General while Moyers would assume duties as press secretary for Johnson. On the surface the memo is astounding in its brazen willful disregard for due process and careful collection and consideration of facts. Katzenbach writes:
"The public must be satisfied that Oswald was the assassin; that he had no confederates who are still at large; and that evidence was such that he would have been convicted at trial...Speculation about Oswald's motivation ought to be cut off...Unfortunately the facts on Oswald seem about too pat—too obvious (Marxist, Cuba, Russian wife, etc.)...We need something to head off public speculation or Congressional hearings of the wrong sort."
At first glance the memo might appear as something pulled straight out of the Nazi Handbook of Justice. As such it is utterly astounding and stupefying that a man destined to become Attorney General of the United States would use the powers of the executive branch to frame an innocent man. Yet he was no common gangland thug. According to his Wiki article he was educated at the most elite schools including Philips Exeter Academy, Princeton, and Yale as well as selected as a Rhodes Scholar. He was a World War II POW, held numerous mid-level government posts prior to the Johnson presidency after which he was lead legal counsel in IBM’s 14 year battle with the Justice Department’s antitrust lawsuit which ended in 1982.
There is good evidence that the memo was crafted as early as the 23d of November which makes it even more remarkable. How was it that the Justice Department determined Oswald’s guilt at such an early date? After all it took the Warren Commission 9 months to arrive at its Kangaroo Court conclusions. How then could the government claim in less than 3 days that Oswald was the only guilty party? The House Select Committee on Assassinations spent 1976-78 investigating the Kennedy assassination – among others – yet Katzenbach managed to conclude that Oswald was guilty as charged by the government and press possibly within hours.

Fortunately James Douglas sheds some light on the matter in his book JFK and the Unspeakable: Why He Died and Why It Matter. FBI Director J. Edgar Hoover had previously briefed Johnson on some information he had received concerning Oswald’s alleged presence in Mexico City linking him to the Cubans and Soviets. Edgar informed Johnson that he doubted that the voice and images sent to him were those of Oswald and that the information had been supplied to him by the CIA as a deception. Thus the CIA had some motive for relating Oswald to the communists.
The reason turns out to be Operation Northwoods which Lyman Lemnitzer, Chairman of the Joint Chiefs of Staff, approved in 1962. The plan called for staged attacks on US soil in order to incite public opinion to demand war against Cuba and if necessary the USSR. Indeed, the JCS nearly compelled Kennedy to launch a first strike against the USSR during the October Missile Crisis. 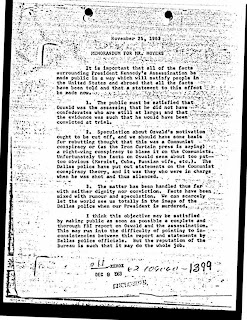 Johnson was also concerned about his own life, asking Hoover at one point if the assassins had targeted him as well. Hoover confidently affirmed that he was not a target. This quick conclusion has its own implications which we will have to explore elsewhere. Nonetheless, Johnson surmised that he was dealing with powerful forces which he could not fully control.
As a way of finessing a potential crisis with the USSR and Cuba, Johnson pulled out the stops to keep Operation Northwoods from spinning out of control by painting Oswald as a lone nut who singlehandedly assassinated the president. There was to be no pretext for implicating the USSR or Cuba in the assassination of the President.
Indeed Jacqueline Kennedy sent a letter shortly after the murder to Nikita Khrushchev absolving him of any involvement in the plot.
We believe that this memo is a direct link in the changing of Johnson’s mind about the establishment of a presidential commission to investigate the murder which means that Bill Moyers was involved in this transformation. Johnson was initially satisfied that local investigations and governments assisted by the FBI were properly authorized and positioned to handle the murder investigation. Yet by 11/28/1963 Johnson was lobbying in favor of the commission.
We also know that Joseph Alsop (October 11, 1910 – August 28, 1989) of the Washington Post lobbied Johnson vigorously for the establishment of such a commission especially on 11/25/1963 in a personal call with the President. The following day the Post published an editorial calling for such a commission. By the 28th Johnson called Senator Eastland to terminate his Congressional investigation.
The risk of letting Texas authorities or Congress investigate the murder was the danger that uncomfortable facts implicating certain people in certain unsavory acts would lead directly back to the CIA. Oswald as we have noted elsewhere was a top CIA, FBI, ONI, and Customs intelligence agent. He had nothing to do with the murder of the President except that he thought he was involved in counter-intelligence to thwart it. As he surmised he was indeed the patsy for the murderers.
The government would have been busier than a one handed paper hanger at the Taj Mahal trying to explain how a CIA agent was involved in the murder of the President. Thus Johnson worked the phones to arm twist Long and Warren to participate in his commission to frame Oswald. Johnson on at least two occasions uses the threat of 40 million lives lost in nuclear war to persuade each man to sit on the commission. It was no idle or speculative threat. The Military Industrial Complex wanted its war.
At this point we believe that Johnson was attempting to make the best of a bad situation. He gave into the war mongers by massively escalating the war in Viet Nam – a decision he regretted at the time. But if the CIA could murder Kennedy, it could also murder him.
Copyright 2010 Tony Bonn. All rights reserved.
Posted by Tony Bonn at 3:03 PM 2 comments: