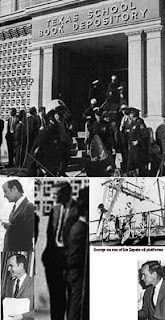 We discovered some fascinating evidence that George Bush was directly involved in the murder of President John F Kennedy, the latest of which evidence comes from the late Roger Craig.
The evidence seems overwhelming that George Herbert Walker Bush was in Dealey Plaza at the time of the president’s murder, supervising the Cubans involved in the assassination squad. Evidence for Bush’s involvement is legion.
Bush denies remembering where he was on November 22d, largely because he can’t remember which lie he should tell about it. It saves him the embarrassing contradictions in which Nixon found himself when explaining his whereabouts on that day.
But not remembering one’s location on that historic and traumatic day doesn’t pass the laugh test although Bush did manage to laugh about it at Gerald Ford’s funeral – precisely when he mentioned the murder. The laugh speaks volumes of Bush’s contempt for Kennedy.
We have written previously about the memo which Hoover wrote about a meeting he had with “Mr George Bush of the CIA” – a memo which irrefutably links Bush with the CIA operating under cover as an “independent oil man from Houston.” We reported in a recent blog posting identifying Hunt as Bush’s case officer in the CIA. These two independent witnesses help cement Bush’s involvement with the agency as well as his presence in the City of Hate on the day he helped murder the president.
Bush was on business for the CIA which is why he had official communication with the FBI and most likely Hoover himself in Washington, DC the following day. His official post was Dallas.
Bush’s cover story is that he spoke at an oil convention – the Dallas based American Association of Oil Well Drilling Contractors, but this is at best plausible deniability. The important point is that  this story demonstrates that he was in Dallas, a fact which the Dallas Morning News reported occurring on the evening of November 21, 1963. Indeed, he stayed at the Sheraton Hotel which was also headquarters of Secret Service communications and other elements coordinating the assassination.
Many have covered the James Parrot story in which Bush called the FBI to warm it about suspicious activity of Parrot. But Parrot worked for Bush, and Bush used this lame story to provide an alibi for his non-presence in Dallas. Unfortunately, the lady doth protest too much.
The Tyler, TX story – the one where Bush supposedly called the FBI from Tyler is a giant hoax. It didn’t happen. Someone impersonating Bush made the call because Bush was too busy supervising the assassination at that time. As we will show momentarily, Bush was nowhere near Tyler.
The aforementioned memo’s citation of the “mis-guided” anti-Castro Cubans clearly associates Bush with Alpha 66, Operation 40, and groups the CIA was training for assassination duty. The pretext is that it was against Castro, but the plan was always against Kennedy. But how do we know that?
A CIA pilot told the story of George Bush being the pay master for Castro. We have posted elsewhere in this Chronicle that Cuba was an invention – a hoax – to justify covert and bellicose operations – to justify the permanent war and police state. Castro was on the CIA payroll and has always been a pawn of the New York banksters.
Now here is the kicker, as John Hankey quotes Dallas Deputy Sheriff Roger Craig speaking with Jim Garrison, the New Orleans district attorney who prosecuted Clay Shaw for his involvement with the murder:
“Jim also asked me about the arrests made in Dealey Plaza that day. I told him I knew of twelve arrests, one in particular made by R. E. Vaughn of the Dallas Police Department. The man Vaughn arrested was coming from the Dal-Tex Building across from the Texas School Book Depository. The only thing which Vaughn knew about him was that he was an independent oil operator from Houston, Texas. The prisoner was taken from Vaughn by Dallas Police detectives and that was the last that he saw or heard of the suspect.” (emphasis added)
Here is extraordinary evidence that George Bush was arrested in Dallas at the time of the assassination. But why was he arrested? We diverge from Hankey’s explanation that he was caught where he wasn’t supposed to be. Citizens knew that bullets were fired from Dal-Tex and were jeering the people coming out. The police were providing Bush an escort of safety from one of the crime scenes, as the Dallas Police were heavily involved in the murder.
Thus an enormous amount of evidence places George Bush in the City of Hate and Dealey Plaza on 11/21-22. The evidence consists of newspaper accounts, FBI memoranda, photographs, and first person witness accounts. George Herbert Walker Bush murdered John Fitzgerald Kennedy.
Copyright 2013 Tony Bonn. All rights reserved.
Posted by Tony Bonn at 12:15 AM